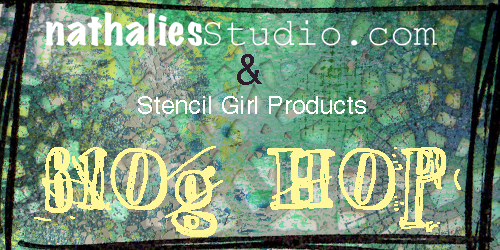 Nathalie designed a range of really cool stencils for Stencil Girl Products and now she’s hosting a series of wonderful blog hops to show case them!

Star of this particular blog hop is the awesome What’s The Point Stencil:

It’s a great stencil for general layering, but it can be used for so much more. How about a field of flowers against a greenish backdrop? Or falling snow? It will be perfect for winter lay-outs and even Christmas cards!

Nathalie is giving away one stencil to a lucky winner! All you have to do is to leave a comment on her blog hop blog post. But…  if you want to boost your chances, I recommend you comment on each of the six blogs along the hop, because Nathalie will give you an entry into the give-away for each blog you comment on!

Here are the links to all the blog hop participants:

Now, let me show you an awesome background created with the What’s The Point Stencil! 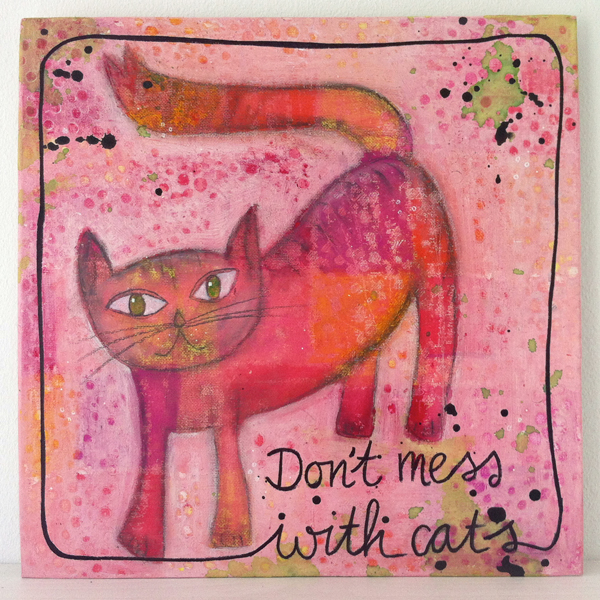 Don’t mind the cat… I didn’t even want it there… It just annoyingly wriggled it’s way onto it. Like cats do.

You see, I started out with this idea in my head. That idea involved oil pastels and gesso and some scratching, so I needed a sturdy surface.

I had this canvas board that seemed perfect for the job. I had already attempted to draw a cat on there once, but I didn’t think that was a problem. It would be covered with oil pastels and gesso anyway: 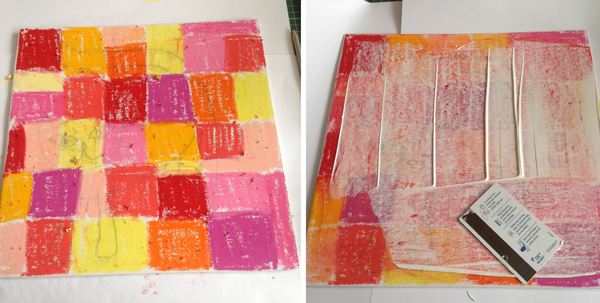 So far so good.

I waited until the gesso was dry and I started scratching away through the What’s The Point Stencil. My plan was to make a cluster of blossoming trees, which evolved into a vase of flowers, which then… caused me to mess up.

I tried and failed to repair the mess. But because of the slickness of the oil pastels, there was no real harm done and I was able to rub all the gesso off with just water. The remaining oil pastel stayed put.

But there it was again: that cat! Staring at me!

I don’t know if you follow Nathalie on Instagram, but the only thing I could think of was #dontmesswithcats… a hashtag that she uses when she ‘instagrams’ photos of her cat.

I started over by only covering the surface surrounding the cat sketch with gesso. Once that was dry enough, I placed the What’s The Point Stencil over it and I used a baby-wipe to rub some of the gesso off again through the stencil. And then I went on from there.

At some point I added splatters of Glimmer Mist and I really like the effect: the ink bled into the gesso, but resisted on the oil pastel.

Also, some of the scratching I did in my first session is still visible on the cat’s behind. It looks kind of cool, so I’m sure the cat won’t mind! :-S

Thank you for visiting me and special thanks to Nat for inviting me to play along and be part of this stencil blog hop!!!

Enjoy the hop and don’t forget to comment for an extra chance to win the What’s The Point Stencil!