The crocuses are currently popping out of the ground in my front yard, so I’d better show you this page before this exceptionally early spring makes us forget about winter entirely.

I shared this page on the Scrap365 blog a couple of weeks ago. I initially created it for the winter gallery in the Dec 2013/Jan 2014 issue of Scrap365 magazine. I actually created two lay-outs for that gallery and the one I will show at the end of this post was published in the magazine. 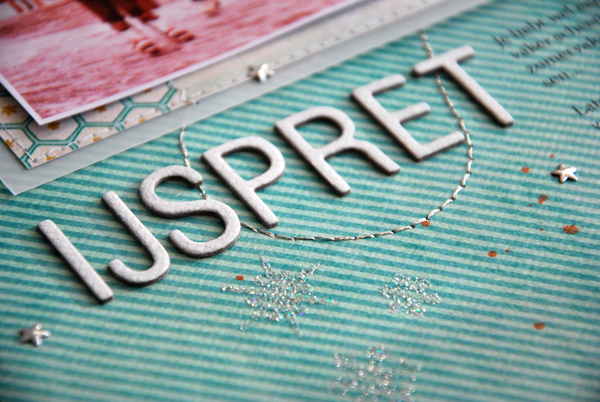 You know how sometimes you remember something, but you dismiss it because it seems silly? Well, I’ve found proof that sometimes silly memories can be true: on this page I used a photo of my mom and me ice skating on the street.

At first I thought that maybe they flooded the street on purpose, but it turns out that wasn’t the case. Due to extreme weather the street actually froze over and we had a couple of days of ice skating fun right at our doorstep!

TRANSLATION:
I have these memories sometimes… Memories that make me think the sun used to shine much brighter and that there were thick layers of snow every winter.

But then I realize that my brain is probably playing tricks on me: the weather has always been unpredictable and in winter it can always freeze as well as thaw.

Turns out that’s what happened in January 1979: severe frost was quickly followed by thaw over and over again. As a result glazed frost caused a thick layer of ice on the streets… Thick enough to skate on it!

If you would like to know what materials I used to create this page, please head on over to the Scrap365 blog!

And here’s the page that did make it into the magazine:

My December Daily was also published in the same issue, but I seriously don’t want to blog that right now… I’ve got spring on my mind! It will keep until the next holiday season, I’m sure… Or if you can’t wait: you can still pick up a copy of the December 2013/Januari 2014 issue in the Traplet Shop!